A Well-Being Multarity to Leverage

In this time of coronavirus quarantine we’re navigating the polarity tension of being simultaneously/paradoxically:

As we navigate this tension, it’s quite possible we’ll find ourselves coming into a deeper awareness of connection to other parts of individual selves we may have been neglecting — physically, mentally, emotionally, or spiritually.

What part have you been neglecting? How might you use this time to reflect on how well or poorly you’ve been navigating all four dimensions? 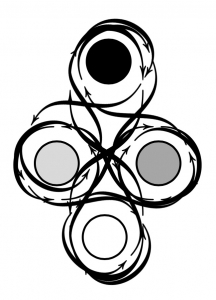 Lately I’ve been undervaluing the spiritual and physical, and that’s taken a toll on the emotional. I was becoming aware of just before the crisis and began a process of spiritual reconnection. Physically, post hip replacement there’s been too little focus on gym activity, and too much on pizza + red wine. That combo of undervaluing hit me hard on the emotional well-being side. It snuck-up and probably contributed to the reason I wasn’t doing a great job of “conversational intelligence”  on social media. (BTW — that’s another multarity, but instead of three poles of a multarity–it’s 3 polarities in the multarity, but I’m digressing into too much mental focus … See how this works — or doesn’t? I should probably hang this up, get to the gym, and work in a meditation or walk in the woods … soon.)

Bottom line — I’m trying to straighten up and fly right on the physical and spiritual sides, which will hopefully contribute to righting things on the emotional well-being side.

The infinity loop is an equally descriptive image for depicting the ongoing exchange of energy in multarities as it is for polarities. The image on the right shows how the energy oscillates among the four poles of the multarity dimensions of physical, mental, emotional, and spiritual. You can simplify the complexity by looking at any combination of two, and how they interrelate…The only difference for multarities is the number of poles the energy is flowing between. Regardless of that number, the energy both differentiates and integrates. The sequence is not a factor in this dynamic flow. However, as is true for the interdependent pair, any overfocus on a single part to the neglect of the other parts that comprise the whole of the system eventually undermines the ability of the whole to function effectively and sustainably.